The aim of this information sheet is to explain what Supraventricular Tachycardia is, what effect it will have on a child and how it can be treated. 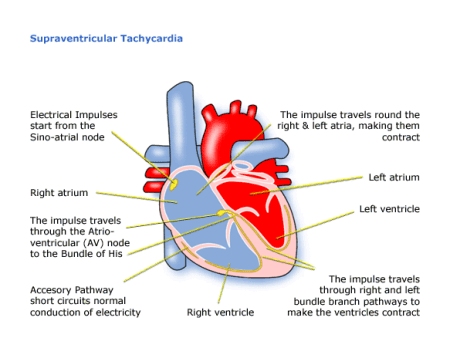 A baby’s heart beat is much faster than an adult’s – you may remember hearing how fast it was before your child was born. As the child gets older the heart will slow down until it reaches normal adult rates of around 60 to 90 beats per minute.

Like the heart of an adult, a baby’s pulse will vary depending on what is going on – slower when sleeping, increasing with crying, eating and so on.

A very fast heart rate is called tachycardia. In children the most common kind of tachycardia is supraventricular tachycardia – SVT for short.

The heart is a muscle with four hollow sections; the chambers. The top two are called the atrial chambers, and the lower two are the ventricles.

The heart muscle contracts when an electrical signal is generated in the atria, by the SA (sinoatrial) node (the pacemaker of the heart). This signal travels across the AV (atrioventricular) node (the normal pathway) to the ventricles. When the cause of an arrhythmia (heart rhythm problems) is within the atria, it is called a supraventricular (above the ventricles) tachycardia.

SVT in children can be present at (or even before) birth. SVT may occur as a result of Wolff-Parkinson-White Syndrome, which rarely runs in families with otherwise normal hearts. SVT can also occur with other heart defects, such as Ebstein’s anomaly.

There are two main types of re-entry SVT:
re-entry SVT happens when the normal signal from the atria to the ventricles returns back to the atria via an additional (abnormal) pathway. This creates a circular movement of electrical signals from atria to ventricles and back. This causes the heart to race quite suddenly for seconds, minutes or hours usually without any trigger.

The most common form of re-entry SVT is caused by an extra pathway in the heart that is in addition to the normal electrical pathway. If the extra pathway shows up on an ECG (electrocardiogram) while the child is resting it is known as an overt accessory pathway. Wolff-Parkinson-White syndrome is diagnosed in this way, however there are other forms of overt accessory pathways.

Atrioventricular re-entrant tachycardia (AVRT) is a supraventricular tachycardia (SVT), which can cause repeat signals of the AV node. AVRT is often associated with Wolff-Parkinson-White syndrome.

Most forms of AVRT are not seen in a resting ECG and are called concealed accessory pathways. These accessory pathways can only be seen on an ECG during an attack of tachycardia. AVRT is more common in babies and young children.

This less common form of re-entry tachycardia is usually not found in babies and very young children and is more common in older children or adults. It is due to an additional pathway in the AV node itself. Diagnosis is usually made from an ECG obtained during tachycardia.

Occasionally a tiny area within the atria produces very rapid signals, which are faster than the normal heart rhythm. This can start and stop at unpredictable intervals. If the attacks continue for long periods of time, and are not treated, the heart muscle can be weakened. Atrial flutter is another type of SVT which is known as a re-entry tachycardia within the atria, but does not include the ventricles. It is common in babies and in children with congenital heart disease.

What to Look Out For

Babies and toddlers may be irritable and tired, pale/grey, sweaty, breathless and may not want to feed. Children can appear pale and can breathe faster and you may notice the veins in their neck twitching. Children who can talk might say they have a funny or sore feeling in their chest or tummy.

SVT can last for seconds or hours and in some cases the feeling of weakness and tiredness can last after SVT has stopped. Other symptoms such as palpitations (irregular or rapid heartbeat) should go as soon as the heart rhythm is back to normal. Many children do remarkably well during these attacks, although some children feel discomfort and weakness.

Although SVT attacks can be distressing to you or your child, they are rarely life threatening.

Your child may be prescribed medicine for treating SVT although it may be a while before the right dose is established. Some of the drugs can have side effects – in particular some parents notice that their children have nightmares, are difficult to feed, or have become very sensitive to sunlight.

Cardioversion describes a medical procedure by which an abnormally fast heart rate (tachycardia) or cardiac arrhythmia is converted to a normal rhythm using electricity or drugs.

There are two types of cardioversion: using medications such as IV adenosine, or via an external shock to the heart. If your child has a prolonged attack requiring attendance at hospital despite taking medications, it may be necessary to shock the heart into a normal rhythm under general anesthetic (cardioversion). Although this may sound frightening it is a simple and effective treatment. Most children with SVT in their first year of life come off medication as they get older if they have no further SVT.

Radiofrequency ablation (RFA) is a medical procedure in which part of the electrical conduction system of the heart can be removed using the heat generated from electrical currents.

For older children with SVT, who need to be on medication for the foreseeable future, radiofrequency ablation may be used. This procedure involves a catheter (a thin tube), being inserted into a vein and up into the heart where it identifies the pathway. This is then destroyed using heat energy created by radio frequency. Although this procedure might take a few hours, it only requires a short hospital stay.

Ablation has a high success rate in curing SVT. Only rarely are there problems with destroying the normal circuit, resulting in the need for a pacemaker. This risk arises when the abnormal pathway is very close to the AV node, or when the SVT is due to an additional pathway in the node itself – AV nodal tachycardia.

Your Child at Home

You may find it very difficult to deal with this problem when you first get your child home. Some parents are frightened of allowing their child to cry in case it triggers an attack – others dare not leave their child during the night, because they fear they may miss an attack.

It is very important that you are confident enough to know that you can leave your child to cry or to sleep. SVT is not life-threatening therefore leaving your child to cry will not trigger SVT. Keep the telephone number of the hospital to hand so that you can call them if you need to. If your baby or child suffers SVT that lasts longer than 20-30 minutes call an ambulance or take them to your local A&E department as they may require intravenous medication to stop SVT.

If your child is being looked after by another person, such as a babysitter or teacher, make sure that they have the relevant information.