A team from CHF including Beatty Bear visited Portcullis House, Westminster to campaign for pulse oximetry testing of all newborns.

The test which monitors oxygen levels can pick up potential heart conditions that have not been found during scans in pregnancy. Early recognition of heart conditions can greatly improve the outcome for the child, reduce the worry and pressure for the family and save money for the NHS.

Most people will know the pulse oximetry test as the “finger clip test” and all mothers are given this test after giving birth before they can be discharged from hospital. To test a baby a similar clip is placed on the baby’s foot.

Over 30 MPs came and had their photograph taken with Beatty Bear, many talked to Alex and Martin, the parents of Georgina who had an undiagnosed heart condition for two and a half years, Pulse oximetry testing could have helped Georgina and other babies like her.

Many MPs expressed surprise that the test was not part of NIPE, the NHS Newborn and Infant Physical Examination and were going to write to their local hospitals requesting that the test be carried out.

CHF also took the opportunity to promote Think Heart, a five point checklist that could indicate a heart condition in an infant. 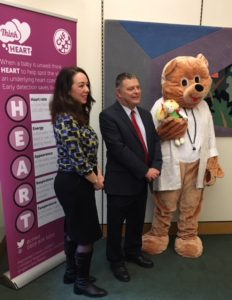 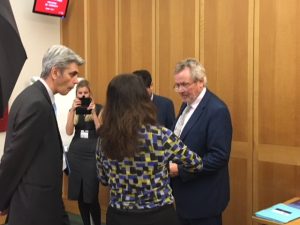