Told by her mother Tas

On the 22 February 2016 I was absolutely delighted to hold Sophia in my arms for the first time.  Apart from slight jaundice and not feeding much and being very sleepy, she was perfect, she was my 3rd child and weighing 9lb, also the heaviest.  I was told babies are often exhausted by labour and may not feed a great deal in the first 24 hours.

The first week at home was intense, Sophia would cry all the time, not feed well and just wouldn’t settle no matter what I did.

By around week seven at home I was extremely worried and stressed, her feeding issues were not resolved despite attending several GP appointments and my six-week post-natal assessment. I was reassured each time that my baby was fine.

At week ten, I trusted my instincts and rushed Sophia to hospital where I finally got an answer, but it was beyond anything I could have possibly imagined. 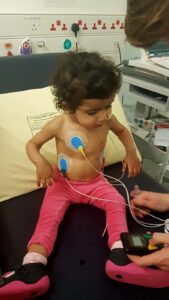 Sophia was diagnosed with Dilated Cardiomyopathy (heart failure) and failure to thrive. She had an enlarged heart and needed immediate cardiac intensive care at Great Ormond Street Hospital (GOSH).

Sophia spent over two months at GOSH in cardiac intensive care before being transferred to a high dependency ward, she was later transferred to Northwick Park Hospital before finally being discharged home.

Sophia has spent a great deal of time in hospital, for the first three years of her life I would rush her to A & E on average every two weeks and her admissions were endless.  She developed metabolic issues around seven months of age and her blood sugars would drop drastically warranting further clinical investigations at GOSH metabolic medicine clinic.

Sophia was placed on the heart transplant register list in December 2017, and continued to be monitored very closely  by GOSH with monthly check ups ensuring she was clinically stable enough to be medically managed at home despite having a heart function at only 20% capacity.

Sophia has spent most of her life so far in hospital, she continues to be nasal gastric tube fed, has to undergo endless tests, routine medical observations, cannulas, PICC lines, so on and so forth.

A match is found

Early in 2019 we finally got the call at 5.o0 am in the morning, it was GOSH, they had found a ‘match’ for Sophia. I remember just being in complete denial at first, refusing to accept in my head at this point in life that Sophia needed to go through such a major procedure with all the risks that it entailed. I was overwhelmed, after all she was bouncing around the day before full of energy and had been seen by her consultant only two days earlier. 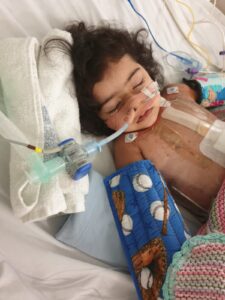 I needed to speak to Sophia’s consultant, which I did straight away, I then realised that actually despite her physical resilience my child is chronically and seriously sick and that without a heart transplant she wouldn’t survive.

Within a few hours an ambulance arrived, we were taken to GOSH where Sophia underwent a cardiac transplant at 3.30 pm.

Despite a great deal of understanding and familiarity with her condition, nothing prepares you as a parent to witness your child undergo such a huge operation.

I let go of her tiny little finger after being anaesthetised, hearing her last words to the surgical team “Please don’t hurt me”.

Finally, she fell asleep and the nurse asked me “Do you want to kiss her goodbye?”.

“Goodbye” was the catalyst, I just broke down in tears, after being so strong and resilient all day, I walked away an emotional wreck wondering if I’d ever see my daughter again but hopeful this would be a success as she was in the best place possible at GOSH.

Sophia is now post heart transplant. She continues to have regular hospital admissions for medical treatment for infections because she is immunocompromised. Sophia no longer has the symptoms of excessive sweating, breathlessness, increased heart rate etc. Her new heart is working well and thankfully there have been no signs of transplant rejection. 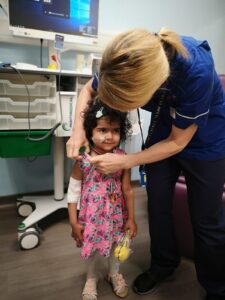 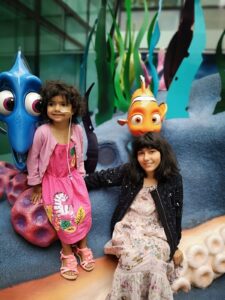 these past few COVID-19 challenging months Sophia continues to thrive and never lets her health challenges stop her from having fun.

Sophia is now four years old and a very confident and social little girl. She always engages directly with the doctors and nurses with her energetic and humorous personality. During her hospital admissions she loves chatting to everyone she meets and especially likes to tell people “My old heart  wasn’t feeling very well, it had a tummy ache and now the doctors put a new heart inside and zipped me”.

I hope Sophia’s story will help raise awareness of the importance of blood and organ donation.

A transplant is not a cure, but it can be very effective in improving quality of life and increasing life expectancy.   A heart transplant is only used as a last resort when all other options have been exhausted.

I see an improved quality of life for Sophia and feel blessed she has had this opportunity, as the sad reality is many children die waiting for a donor heart as there is a shortage.

I am absolutely amazed at the precision of assessment and ongoing treatment Sophia continues to receive from her specialist team at GOSH, and as her mother I ensure she attends all her appointments and is given her immunosuppressant (anti-rejection medicine) on time and strictly in accordance with her medical care plan, to prevent rejection of her new heart. 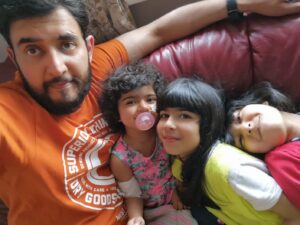 I am happy to share that Sophia’s diseased heart was able to benefit other children. Her heart valves were in excellent condition and we agreed to donate them at the time of her transplant. It’s pretty amazing to think as a family we were able to make a small contribution and that Sophia’s old heart has benefited others. 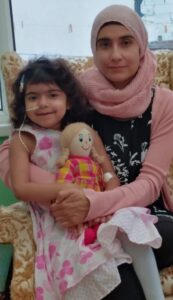 Even within her diseased heart there was potential to make a great difference.

Sophia with her Molly’s Dolly provided by the Children’s Heart Federation. The doll has scars which match Sophia’s surgical scars.

“I got Molly doll from the postman he gave it to me this morning,  and guess what Gail, guess what my Molly doll has stitches near my tummy near where I had the big surgery, where they take the whole heart out and zipped it.

“I’m going to bed now with my Molly dolly and I will bring Molly to the hospital next time I come, now Molly is tired and she will sleep after I wrap her in the blanket and give her medicine and her blood test because she has coronavirus”.