Told by his mother Kerry 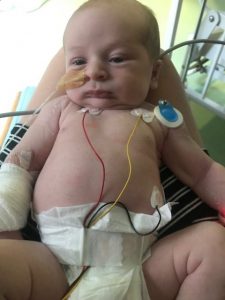 Rowan after his echocardiogram

When my son Rowan was one week old I noticed he looked a little blue around the edges, was breathing heavily and his fingernails had turned purple. We went straight to A&E because he was so young and small. My husband wasn’t allowed to accompany us because of coronavirus restrictions.  When we got there it seemed like every screening test possible was performed on Rowan this was extremely traumatic for both him and me.

The test results kept coming back fine. It was great to hear that a lot of things had been ruled out but it was also worrying that something still wasn’t right and we didn’t know what. The main concern was Rowan’s oxygen levels. His oxygen levels were consistently around 80 and should have been in the high 90s to 100. For this reason, Rowan was given oxygen. It was thought that he had bronchiolitis but as time went on it became apparent this was not the case.

After a week in hospital being tested and given constant oxygen the doctors seemed really stumped. However as one doctor thought he heard a heart murmur we transferred to the children’s hospital in Bristol for an echocardiogram.

The echo showed that Rowan had a displaced valve and a hole in his heart,this was why his saturation levels were low. It was reassuring to hear that Rowan’s condition is on the mild end of the spectrum. However, he will need surgery later in life to fix the valve and to close the hole. It was a very bitter sweet moment. After a week of worrying we had a diagnosis, but at the same time it wasn’t easy to hear that our baby had something wrong with him.

The doctor explained that Rowan would need life-long monitoring but they were happy for him to go home. This was great news as I had been a week in hospital which meant a week of not seeing my husband or our two-year old! 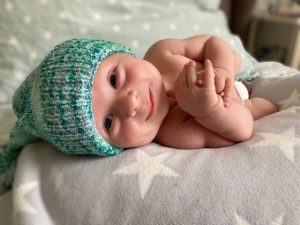 However it was also daunting as Rowan had been monitored round the clock for a week and this would not be possible at home. I kept thinking “how do I know if he is getting enough oxygen or if his heart is okay?” My biggest fear was him going to sleep and not waking up. The doctor then suggested that I stay in for another night so I could have a ‘practice night’. They took Rowan off all monitoring so I could see what being at home would be like, without panicking or watching him all night long! This really gave me some peace of mind and reassurance.  I also took some photos and videos of Rowan where the doctors and nurses were happy that he looked well. If ever I doubt if he was okay I can look back at these pictures and videos for reassurance or to see if anything had changed for the worse.

We have had one appointment with the specialist who said they will look at surgery when Rowan is about seven years old. Rowan is currently being monitored every six months. His heart condition is a rare condition called Ebstein’s Anomaly, it is still very new to us and we have no idea how it will affect him as he grows older.

Ebstein’s Anomaly is usually picked up on at the 20-week scan, in Rowan’s case this did not happen. Looking back, when we took Rowan to A&E he was showing some of the five signs of Think Heart, I would like all new parents to be aware of these signs and not to be afrais to ask that their baby’s heart is checked.

Energy – sleepy, quiet, too tired to feed or falling asleep between feeds

Appearance – is your baby a pale, waxy, dusky, blue or grey colour?