My name is Kirsty, I am a mum to a handsome little boy who was born with congenital heart block. In my 28th week of pregnancy I was told that my baby had a serious heart condition and would possibly not survive; he would need surgery the minute he was born.

When Rico was born, he was taken to intensive care for monitoring, but the medical staff were astonished at how well he was doing. He was diagnosed with 2nd-degree heart block and I was told he could possibly reach the age of five before requiring a pacemaker. Rico was discharged from hospital ten days after birth and continued to have regular check-ups. At his three-month check-up we were given the devastating news that he had deteriorated and that his heartbeat was only 36 beats per minute. We were aware that a new-born baby’s regular heartbeat is between 120 to 160 beats a minute, so we knew this was serious. We were told Rico would need surgery within a few months and were sent home. 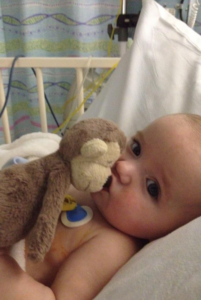 Later that day I had a horrible feeling or a gut instinct that we shouldn’t have been sent home and that Rico needed surgery immediately. As I watched him his little face started to get pale and his feet looked blue and were cold like ice. I called the ambulance which took a while to arrive, as the hospital is an hour away. Rico was put on a little oxygen in the ambulance, but I still had the gut feeling something wasn’t right, I couldn’t explain it but I trusted that it was true. As my husband and I entered the hospital Rico went into cardiac arrest in front us. It was awful, he had wires everywhere. The hospital staff eventually managed to stabilize his heart to just 20 beats a minute. We were told that he had complete heart block with heart failure and needed surgery very quickly. He was meant to go down for surgery at 11.00 but it was delayed until 12.00 and as Rico was taken to theatre, the hospital team began running with his trolley as his heart was stopping.

The medical staff had managed to stabilize Rico and the pacemaker was working, all was going well. Rico was still in ICU but improved daily and a week later was sent home. The following week that horrible gut feeling that something was wrong came back. I promised myself to always listen to it, so I called the ambulance and we went to hospital. This time I was advised that everything was ok and that it was normal to feel anxious. However, I insisted that Rico was checked thoroughly. I waited for around six hours before being put on the ward, as I was due back the following day for a routine check-up. Rico was monitored with a 24-hour tape overnight. The next day they said they were happy with him and sent us home. As we were driving home the hospital called and explained that the tape had shown that Rico was in heart failure again and his pacemaker was failing.

Rico went straight back to hospital for more surgery and was kept in ICU a lot longer to stabilize him. Over the next six years we had the usual unexplained episodes and hospital stays. The settings on the pacemaker were also adjusted from time to time.

At the age of six Rico went for his routine three-month pacemaker check. The medical staff said that it looked like his battery had started to deplete and that he would need a new pacemaker in the next three to six months. After having gone through what we did when Rico was a baby, I was in shock. I wanted them to assure me that he would be ok. That gut feeling came back, so I didn’t send him to school or any other activities until he had another check-up.

Four weeks later Rico had another check-up, at my insistence. He was admitted that day for an emergency pacemaker fitting as the old one was failing again. A new pacemaker was fitted in front of his chest, as it was too risky to take the old pacemaker out. We discussed Rico having two pacemakers, as a back-up system, as he had no underlying heartbeat.

This is my story of my wee warrior Rico, he’s incredible, a little super-hero.

Some people never meet their hero I give birth to mine.

We’d also like to say to all parents of children with heart conditions to trust your gut instinct.