Told by her mother Krystal 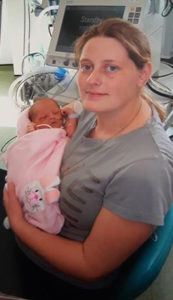 My daughter Poppy was a fast delivery and was born in the car at the hospital car park. We were concerned because she was a blue shade in colour but the midwives assured us that this was because she was born outside and was probably cold. A junior doctor examined her and said she was fine. After 36 hours of myself and my partner expressing our concerns about her colour and saying we thought there was a problem a senior doctor took us seriously. We were sent to the special care baby unit to use their equipment as Poppy only weighed 5lbs 1oz. The pulse oximetry test showed that her oxygen levels were only 38 percent and that her heart was racing. A second test with a different machine showed the same result. We were asked to leave while the SCBU doctors examined her further, at this point Poppy stopped breathing and had to be resuscitated.

We were called back into the ward and told that they didn’t know for sure what was wrong with Poppy, but they were waiting for a phone call for her to be referred to a specialist hospital as they thought the problem could be her heart.

Eventually a bed became available at the Evelina, but we had to wait for a neonatal ambulance from Brighton to come. So, it was many hours later that we set off as it also took further time to stabilise Poppy so she was safe to travel. I sat with the driver all the way to London and Poppy’s Dad sat with her, the crew and the Doctor in the back. When we arrived at the Evelina the staff were kind and said to go have a coffee while they changed the monitors over and a cardiologist did a scan.

An hour later we returned to her bedside, the Doctor was still there and said she was nearly done and that she would speak to us shortly. When she had completed the scan, we were told that Poppy had TGA (Transposition of the Great Arteries) my heart dropped as I’d never heard of this condition before. The Doctor explained what the condition was and how it would be treated, she said that Poppy would need open heart surgery in about a week’s time and that the surgeon would speak with us in the morning.

That night we Googled, cried and didn’t know what to do. The next morning, I signed the consent form for a balloon atrial septostomy to be performed that day. This procedure was successful and later the surgeon spoke to us about the operation he would perform the following week, how the arteries would be switched and how it was all to be done. My heart broke again over our tiny baby going through so much at such a young age.

The switch went well, but if it wasn’t for the staff at the Evelina I wouldn’t have known what to expect or even what to do.

If a pulse oximetry test had been taken when Poppy was born, I feel she could have been treated earlier rather than getting to the stage of needing resuscitation. I also think Doctors and midwives need to be more aware of the signs of heart conditions and not to fob you off when you are concerned. Instead we were labelled anxious parents and told off for not doing skin-to-skin as they claimed the baby was cold. 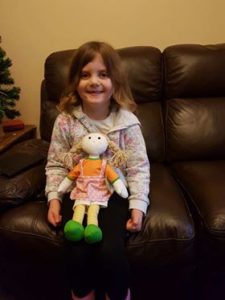 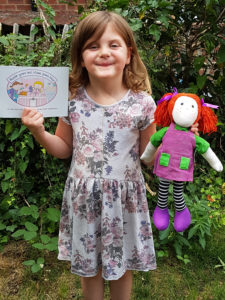 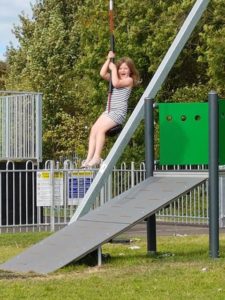 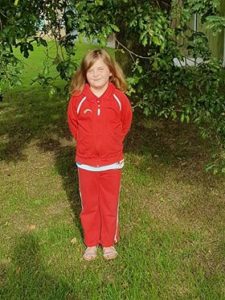 Poppy is well now and on two yearly check-ups with the Evelina. She has just been made a class prefect for the year and got a 100% attendance certificate. She is a rainbow and is joining Brownies soon. She loves to chat to people about her heart since she got her Molly’s Dolly, she uses it to tell other children about her heart condition and why she has scars.