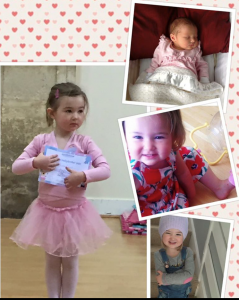 When Phoebe reached the age of eight weeks, she stopped breathing and had to be resuscitated, this happened again six weeks later and then gradually more frequently until it became a weekly occurrence. Phoebe would go floppy and lifeless for anything from ten seconds to two minutes.

After numerous tests on Phoebes’s brain Phoebe was fitted with a holter monitor* which recorded one of these episodes happening and showed that her heart had actually stopped. Within a few weeks Phoebe was fitted with a pacemaker, her condition is known as RAS (Reflex Anoxic Seizures) (RAS), more serious cases such as Phoebe’s can be helped by pacemakers. The pacemaker starts working when an RAS attack starts preventing the heart from stopping completely and also preventing loss of consciousness.

Phoebe’s episodes went on for a whole year before diagnosis and although not all of them needed resuscitation I strongly believe if the doctor had taken us as a family more seriously, we wouldn’t have had to go through such emotional torture as we did. Luckily I never let her out of mine or my husband’s sight which meant that when an episode happened we could act fast.

Phoebe had her pacemaker fitted just after her 1st birthday. She still seizures now four years later but instead of going lifeless and floppy she might go into a trance, at other times you wouldn’t know she is having a seizure due to the pacemaker kicking in. She will need to be fitted with a new pacemaker next year because its battery will be nearing the end of its life.

There are some limitations to what Phoebe can do (eg gymnastics and trampolining) but she has an absolute passion for dance and has two competitions coming up this year. Phoebe is so knowledgeable and aware of her condition, she loves being different and I’m so glad we, as her family have been able to give her such a positive attitude.

*a Holter monitor is a portable device that measures and records heart activity (electrocardiogram or ECG) continuously for several days.

Further information about RAS and pacemakers.