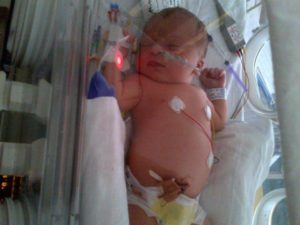 Told by his mother Charlotte

When I found out I was pregnant we were so happy, but I suffered a big bleed at eight weeks and again at 16 weeks into my pregnancy.

All then went well until my 20-week scan. I was told I was having another boy and was so happy but then that was dashed as I heard the words ‘there is something wrong with your baby’s heart’.

Two days after the scan I went to see a consultant who gave me another scan and that’s when I was told my baby had Hypoplastic Left Heart Syndrome and also a hole on the right side of his heart. I was informed that the hole was making the baby weak and that I may lose the baby before the 26 week mark.

I was scanned every two weeks and the pregnancy went full term. At 39 weeks and four days at 7.30 in the morning I started my contractions and Myles was born that night 22.51 weighing 8lb 2oz. 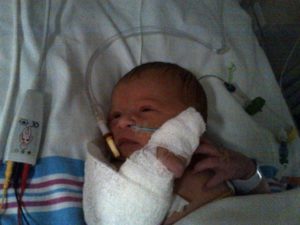 The next day he was moved to Birmingham Children’s Hospital for testing, as a result of these tests we were told that Myles was too weak for surgery because of the hole in his heart. The doctors advised that it would be best to stop his medication and to let him go because he would only have a 5% chance of surviving surgery. I told the doctors that I wanted my son to have a chance at life and that I wanted him to have surgery. Finally, a surgeon came to see us, he said that he was willing to do the surgery because we wanted it to be done and were aware of the possible outcome.

On Wednesday the 7th August 2013 at 9.00 am we were told that Myles’ bed on PICU had gone so they had to delay his surgery, but at 10.45 am I received a phone call asking me to come back to the ward asap. When we got there the nurse told me that I needed to give Myles his wash as he was going to surgery at 11.30.

I carried Myles down to surgery and held his little hand while they put him to sleep, we had to trust the surgeon with our baby’s life and to trust him to look after my baby boy. At that point all I could think about was what the doctor had said about Myles only having a 5% chance of surviving.

At 16.30 I was told that Myles was out of surgery and in PICU. We went straight down to PICU to see him and the surgeon said that we had a fighter on our hands because he had overcome all the odds. Two days after surgery they closed Myles’ chest and on day three, they started to wake him.

13th August – Myles was well enough to go back to the ward from PICU. He was put in an HDU and then the next day moved to the LDU. Once there I finally started to feel at ease because my baby boy had come so far.

20th August – Myles’ cardiologist said that Myles was doing very well but there was concern about the leak in Myles’ heart and that they didn’t expect Myles to reach his 1st birthday.

28th August – at 10.30 am the doctor came to see Myles on his rounds and that’s when I finally heard the words ‘you can go home today, when you’re ready’. I couldn’t believe what I heard, we waited for his medication then went home.

10th December – Myles was admitted back into hospital for nine days with RSV virus.

28th January 2014 – Myles went into hospital for a cardiac catheterisation and the following day had stage 2 surgery. The surgery went well but his left lung collapsed as Myles had a chest infection.

10th August 2017 – eight days after his 4th birthday Myles was admitted into hospital ready for his stage 3 surgery as he wasn’t doing too well. He was struggling to breath when walking and always looked “blue”.

11th August 2017 – Myles had his third open heart surgery. The surgery went really well up until the point of coming off the bypass machine. At the first three attempts at Myles’ heart stopped but the 4th attempt was a success and Myles was then taken to PICU. The following day Myles was taken to the ward where he had to learn to walk with four chest drains.

21st August 2017 – Myles’ last chest drain was removed and the next day after a total of eleven days in hospital the doctor said we could go home.

23rd December 2017 – a hospital check showed the leak had increased but was stable.

13th April 2018 – further hospital tests showed that the leak was stable but the pressure had increased and that the valve is damaged.

We were then told that there is now no surgical option for him so his medication have been increased to keep him stable. The cardiologist said that Myles isn’t going to get any better and that his heart will eventually fail.

17th August 2018 – we found out that the leak has increased a little, Myles’ cardiologist then told us that she doesn’t think Myles is going to survive to his teens. 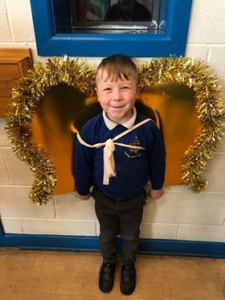 However, Myles is now 5 and living life to the full he does everything a child of his age does. He goes to full time school and plays with his two brothers.

Myles fights CHD with every heartbeat!