Told by her mother Natalie

We had been waiting for the birth of our daughter Miley for years. We had fertility treatment to help conceive her and we were so excited to meet her. I had no complications in my pregnancy and we were told at the scans that the baby was healthy. However, at Miley’s newborn checks the doctor said they could hear a murmur but not to worry as a lot of babies are born with tiny holes in their hearts that close on their own. So we didn’t worry. We just enjoyed being new parents.

On the 5th November 2009, Miley was six weeks old, we went to the hospital to see a cardiologist to check Miley’s heart. I will never forgot that day, he put it so bluntly that our sweet baby girl had Tetralogy of Fallot and would need open heart surgery before the age of one. It was devestating. A kind nurse took us into another room and explained everything to us in detail.

Over the next few weeks Miley struggled to drink milk and suffered with reflux, she would be sick after each feed and was barely gaining any weight so at six months old the dietitian made the decision for her to have a nasal gastric tube and have high calorie milk. She continued to be sick and weight gain was still minimal. On the 6th July I phoned Leeds General Infirmary to see how far on the waiting list Miley was for surgery, she was 10 months old and we were beginning to worry that she was getting closer to one year old and we hadn’t heard anything. They phoned me back a few hours later asking us to come to hospital the next day to prepare Miley for surgery. It was terrifying for us and we went through a roller-coaster of emotions.

On the 8th July 2010 I carried Miley down to surgery, holding her in my arms as she drifted to sleep. Surgery was about to begin so I was ushered out of the room. The fear of not knowing if she would make it through was unimaginable. Six hours later we received the call that Miley was out of surgery.

Our daughter had made it. Although Miley had wires covering her and was still attached to machines to keep her alive, she now looked beautiful and peaceful and a much healthier colour than before surgery. Over the next few days I couldn’t have asked for any more from the staff, I was  amazed by their care for Miley. After a few days Miley moved from intensive care.  She was put on a high dependency ward and stayed there two days before being moved to another ward. On day eight Miley went home, by this time then she was crawling around and pulling herself up on things. We were amazed by her strength and determination. 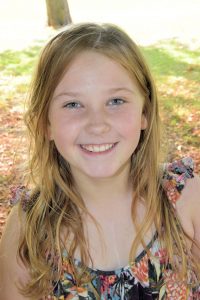 Miley recovered well after we returned home, she started gaining weight instantly and after a few weeks had her NG tube removed for good. Miley has stayed strong and healthy, winning races in sports days. She also enjoys swimming, dancing and bike riding – she loves being active.

Miley is 10 now, she continues to stay active. During the last year Miley occasionally experiences pain in her chest, but this could be down to growth. We hope to learn more at her next check up. Miley will need more surgery in the future to replace her pulmonary valve because of leaking. We are taking things one year at a time and so far Miley’s yearly check ups have been positive. We are extremely proud of Miley, she is a beautiful, intelligent and happy girl. And most importantly- a true heart warrior. We will be forever grateful to the staff at Leeds General Infirmary for saving Miley’s life.