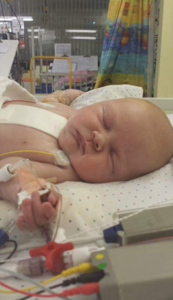 Mia was born on 14th October 2010 six weeks early and weighing 5lb 6oz (a good weight for her prematurity). She was breathing at birth but stopped shortly afterwards and had to be resuscitated. She was then put on a ventilator but pulled the ventilator out and was breathing on her own and incubated. Ormskirk Hospital staff detected something was possibly wrong with Mia’s heart but that it was probably nothing serious, they sent Mia in an ambulance to Alder Hey just to be on the “safe side”. It was at Alder Hey that Mia’s parents were told she had a severe heart condition Tricuspid Atresia and would need surgery, she was given medication and allowed to go home.

After two days at home Mia turned blue so was taken back to hospital and on October 31st was rushed to ICU, on November 1st her parents gave consent to the operation knowing that there was only 30% chance of survival as she was so poorly. There were problems after the operation as the shunt that had been fitted was too big for her body. Eventually Mia was stabilised and allowed to go home. Mia soon came back to hospital because she wasn’t feeding properly, she also had inflammation of the bowel NEC (Necrotizing enterocolitis a disease that can affect premature babies). Mia was rushed to theatre and had stomas fitted for a planned ten to twelve weeks, but Mia still had feeding problems so was given TPN (Total Parenteral Nutrition – intravenous feeding). After this followed episodes of unexplained screaming, Mia was clearly in pain so was put on morphine to calm her down as again she was trying to pull out the tubes that were helping her. After she had a cardiac arrest it was discovered that she had severe acid reflux. 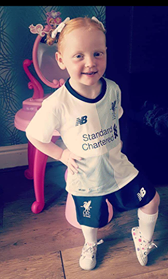 Since then Mia has had a Jedostomy (a feeding tube into the stomach) and fed through the bowel, in all she was in Alder Hey Hospital for 14 months with just a six-week window at home between stays. Mia had a Fontan procedure to further correct the problems with her heart, the operation went well but Mia had to be treated for sepsis immediately afterwards and was on antibiotics for three weeks, for nine hours a day, Mia also had a blood clot in her arterial line and when the line was removed, showed signs of having had a stroke.

Mia will not fully recover from the stroke she has weakness on her right side and needs to wear a leg splint and will possibly also need an arm splint and is now on warfarin. Despite her health ups and downs and battles, Mia started main stream school in September 2018 and although she often gets tired and needs to be collected early, she loves school.