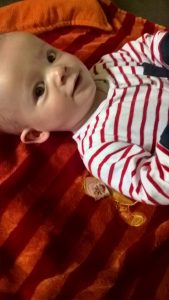 Hello my name is Jade and I’m hoping that by sharing my son’s story I can help raise awareness of congenital heart conditions.

Having had three children previously, when I went for my 20-week scan during my fourth pregnancy I was prepared for the procedure to take a while. However, while the sonographer was looking at my son’s heart the atmosphere in the room changed, then followed the words no mother wants to hear ‘There’s a problem with your baby’s heart, you need to see a specialist at a foetal medicine unit‘.

I hoped there had been a mistake that they had got it wrong and that maybe it was nothing; but when I saw the specialist, Mr Gordon Gladman at Saint Mary’s Hospital in Manchester, he confirmed that my son had Tetralogy of Fallots. However he reassured me that it could be repaired and I felt confident that my unborn was being very well cared for.

Labour was induced two days before my due date and the birth was pretty quick and traumatic but he was born bright pink and crying, looking the image of health!

He was taken straight to neonatal ICU for monitoring and by the time he was four days old his oxygen was getting low so Prostaglandin was administered and he was transferred from Stepping Hill hospital to Saint Mary’s hospital for specialist treatment. After a week at St Mary’s he collapsed with low blood pressure, as the duct in his heart wasn’t coping, after hours of being stabilized he was transferred to Liverpool’s Alder Hey Hospital for emergency open heart surgery.

The operation was complicated and long and at one point he had a cardiac arrest but the amazing staff saved him and he was put on life support. Just days later he became very poorly again with a burst appendix and major abdominal surgery was required. After that operation he was rushed down to theatre again with prolonged bleeding.

Despite all these distressing events he has been getting better and better each day and is now awaiting his full repair surgery. He’s my warrior and I’m so proud of him.