Told by her mother Caroline 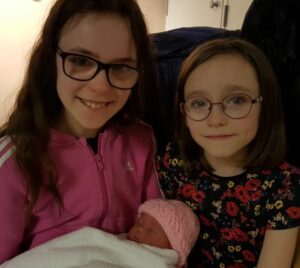 Hope was born on the 24th January 2020 with Trisomy 21. This brings with it a list of possible medical issues, including heart defects and so she was given many scans at a just a day old. The scans revealed that Hope had a partial ASD and it was left to hopefully close up by itself. We were therefore discharged from hospital, much to the delight of her two older sisters; Rachel (12) and Laura (9). But by the 1st of February Hope’s feeding had deteriorated mainly because she was sleepy all the time and was vomiting a lot. We took Hope to A&E and were admitted to the cardiac ward on the 9th of February.

Further scans revealed that Hope had a complete AVSD and a nasal gastric tube was inserted to help with her feeding. Finally, after establishing a feeding pattern, Hope was discharged from hospital on the 21st February. 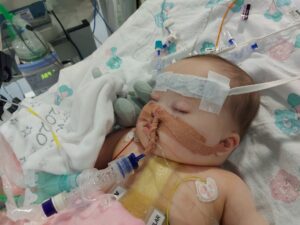 Hope attended clinic early and it was decided to plan surgery for when she would be four or five months old. In the end Hope was already six months of age when she finally underwent surgery on the 10th July, during the 2020 pandemic.

Hope developed chylothorax after her operation, which was something we had been warned could happen, this delayed her recovery, but despite this, she did amazingly well and was home by the 21st July. 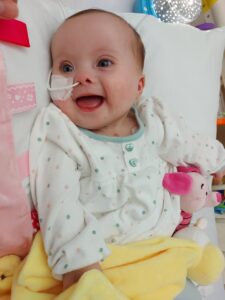 There were a few things we had been prepared for because of meeting another Mum whose baby had her repair while we were in hospital in the February. This helped a lot, but there were still a few things that took me by surprise and like everyone else who goes through this I found it heartbreaking to see my baby in pain.

Hope’s valves are still a little leaky and will need to be checked regularly. She is now thriving and hopefully will need no further surgery but we’ll wait and see.

We are so happy with the amazing work of the doctors and nurses in PICU and Ward 1E. We are looking forward to the future with lots of cuddles and smiles from baby Hope. 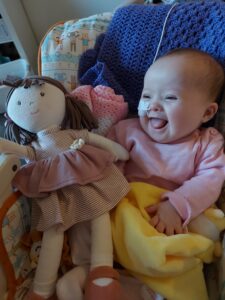