Told by his mother, Danielle 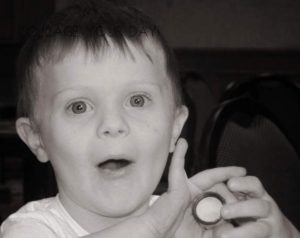 I had a scan when I was 21 weeks pregnant, my baby was diagnosed with hypoplastic left heart syndrome (HLHS).  Henley was born in 2013 and after he was examined by the cardiologist, the diagnosis was changed to HLHS with complete unbalanced AVSD and vessel variation.

Henley suffered severe left vocal cord palsy resulting in an unsafe swallow. Because of this problem Henley needed to be fed by tube. He had a laparoscopic gastrostomy fitted when he was 18 months old because he had been suffering with continuous chest infections from aspirating, (breathing in food). Henley’s health improved dramatically after this procedure.

Henley developed necrotizing enterocolitis (NEC) requiring TPN feeds.  TPN stands for Total Parenteral Nutrition which means that all the nutrients are put directly into a vein. Luckily he didn’t require surgery, but Henley still has bowel problems as a result.

Henley has had two further key-hole surgeries to remove collaterals of the heart (these caused him to cough blood).

He has also had three cardiac catheter procedures to expand his arteries. 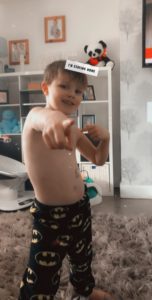 Henley is otherwise well but has poor weight gain and is behind at school as he has missed so much because of long stays in hospital. He takes the blood thinner warfarin which means he needs to have the clotting levels of his blood checked at least weekly. CHF provided us with a machine so I could test Henley at home and this has given me peace of mind and has meant that he hasn’t had to spend a lot of time hanging round a hospital and missing even more school.

Henley is a very happy active young boy with the wildest imagination. He makes friends with literally anything, even a pebble which he has called Bolder! He loves water and the outdoors however he does struggle with breathlessness and becoming cyanised (blue) so needs to take rests.

Henley is struggling during the coronavirus lockdown as he likes to keep active. He goes in the hot tub every day and does art and crafts in between times. He is loving living in his pyjamas and is enjoying playing computer games and dancing along to music.

Henley has made a video advising people to wash their hands, it had an amazing 7000 views on Youtube.