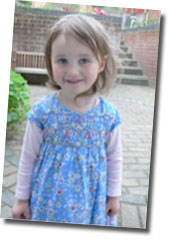 Alex Smith’s daughter Georgina was born with a heart problem which went undetected until she was almost two and a half. Georgina’s condition was missed at the 20-week scan during Alex’s pregnancy as well as on other occasions where Alex took Georgina to see medical professionals due to her concerns about Georgina’s health.

Georgina was displaying a number of the signs of a possible heart problem which are included in the Think HEART message.

After Alex expressing her concerns about Georgina’s health on many occasions Georgina was eventually diagnosed with the rare condition Ebstein’s Anomaly.

Georgina also suffers with episodes of tachycardia so has had an internal cardiac monitor fitted and this gives her parents peace of mind.

Georgina was diagnosed with Ebstein’s anomaly in 2009 and will need a valve repair at some point. This is because the reconstructive surgery won’t grow with her and she needs to grow as much as she can before she can have the surgery.

She is now at secondary school and has also been diagnosed with POTS postural tachycardia syndrome. Georgina struggles with day to day activities and gets tired easily.

Her family heard about the Children’s Heart Federation as they were looking for help with some play therapy to get Georgina over her anxiety around hospitals and staff. 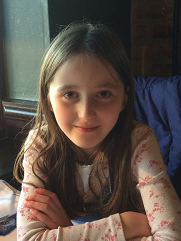 “Georgina’s condition was missed at the 20 week scan while I was pregnant. After she was born I knew something was wrong. She just wasn’t well. I took her time and time again to see her GP and other medical professionals but they didn’t connect her symptoms with a heart problem, they said things would improve and I should just give it time.

“It was so stressful having a sick child and not being told what was wrong, as a mum all you want to do is make sure your child is well. Knowing there is something wrong, with her but not knowing for almost two years what, was just awful.

“I’m campaigning and pushing for the implementation of the Pulse Oximetry test for every newborn baby so other parents do not have to go through what my family has had to experience. It’s such a simple change and a quick test, but it could help so much in giving reassurance to families and in detecting babies heart problems early.

“I think everyone should also make new parents aware of Think HEART  five vital signs that could indicate that a child may have a heart condition.”