Express - OUR GIRL IS KEPT ALIVE BY A REMOTE CONTROL 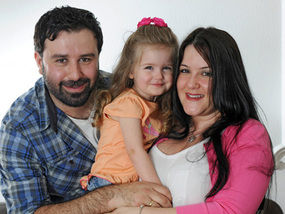 BORN with holes in her heart MIA PERSOGLIO has been fitted with a device that grows with her.

Long before Natalie Persoglio’s first child was born she knew her little girl faced a battle for survival. While still in the womb her baby was diagnosed with a series of holes in her tiny heart.

When Mia arrived weighing 5lb 6oz her 35-year-old mother was able to hold her for barely a minute before she was rushed off to an intensive care unit.

“I saw her take her first breaths which was reassuring but it was an awful time,” recalls Natalie. “I’d had no trouble during my pregnancy but a scan at 26 weeks showed a possible problem.

“I’d been expecting it to be routine so it was devastating.”

There was worse to come. In addition to the holes in the heart there was a thinning of the newborn’s main artery.

“My only question to the doctors was could they fix her,” says Natalie, a marketing manager from Warrington, Cheshire, who is married to Christian, 36. “There was one big hole and lots of smaller ones. Mia’s heart looked like a block of Swiss cheese. The big hole was a centimetre in diameter which is huge when you think of the size of a baby.”

Mia was transferred to Alder Hey Children’s Hospital in Liverpool and when she was only five weeks old had surgery to repair her artery.

Because of her age and size it was too risky to operate on any of the holes, which were allowing blood to flow too quickly from the heart to her lungs and causing pressure to build and damage the fragile organs.

It’s a life-threatening condition and typically a band is fitted to restrict the flow of blood until the child is old enough for permanent treatment.

A band carries a risk because as the child grows or the blood pumps at a different rate it is often necessary to adjust it.

“Mia might have needed surgery three or four times to ensure the tightness was correct and she was still so small,” says Natalie.

Then came a good fortune. Antonio Corno, the inventor of a remotely controlled heart band which is operated from outside the body, was working at Alder Hey. He suggested Mia would be suitable for the device.

As soon as Mia put on a little weight she had surgery. She was four months old.

The 50p-sized plastic device called FloWatch is placed around the pulmonary artery to narrow it. It is run by a tiny motorised piston and can be adjusted as often as necessary without further surgery. Ram Dhannapuneni, a paediatric heart surgeon at Alder Hey, says: “This device buys time until a child is able to have surgery.

“In the meantime it protects the lungs which might otherwise be irreversibly damaged. Being able to control the device externally is a huge advantage because every operation carries a risk such as infection.”

FloWatch is suitable only for children weighing more than about 6lb 6oz and up to 22lb (3kg to 10kg) so most are less than a year old when they have the treatment.About 50 children have now been fitted with the bands.

The technique is more commonly used in other parts of Europe and is only offered in the UK at Alder Hey.

This is partly due to the band’s £8,000 cost although studies show that in addition to reducing invasive surgery FloWatch also cuts patients’ number of hospital stays.

The device can be used for other heart defects and in future could be developed for use as a gastric band to treat obesity.

“Mia was among the first 10 babies to have this treatment,” says her mother. “It was amazing luck that she was already being treated at the hospital where the inventor worked. We can only think that someone was watching over us.

“It took a while for Mia’s body to adjust and it was touch and go for a bit. She was in intensive care for nine days.”

Mia was allowed home for Christmas in 2010 and has continued to thrive. Now aged two-and-a-half she is a lively toddler who is achieving all her development targets. The small holes in Mia’s heart have now closed naturally but she will eventually require surgery to close the remaining large one.

Over the past few decades diagnosis and treatment of holes in the heart have vastly improved.

Children with simple congenital heart problems can often have normal active lives because their heart defects have been repaired or have healed on their own.

Natalie says: “This device is enabling her to grow and get stronger all the time. It was adjusted two or three times to make sure the pressure was right. It was amazing to be able to watch the doctors making the alteration just by pressing a button on a keypad.

“The bigger Mia is the less the risks are when she has surgery. We expect that will be later this year and we’ve been told that at her age closing a hole in the heart is a relatively routine operation.

“After that she shouldn’t require any more surgery and although it’s been a long tough road we can finally relax.

“FloWatch saved Mia’s life and for now all we have to do is watch out for her lips turning blue which is a sign that the band is too tight.”

Natalie is expecting another baby and this time scans have showed no heart problems.