Told by her mother Helen. 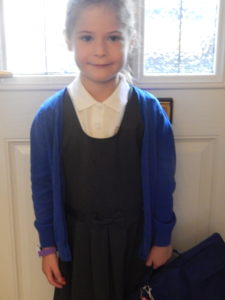 “Eleanor was born in August 2012 following a normal pregnancy and birth so mother and daughter were discharged from hospital later that day.  At four days old, Eleanor was seen by a GP who undertook  tests to check normal functions.  It was at this point that we were told to go back to the hospital in the afternoon as a heart murmur had been picked up but further tests would be needed to confirm.  At the appointment in October 2012, following consultation we were told that Eleanor had a condition called Pulmonary Stenosis.  Eleanor would be seen by the neonate community team every two weeks for the first two months to check her oxygen saturation levels and she was seen roughly every three to four months by the paediatric cardiologist at Milton Keynes Hospital for her first year.

Eleanor is now 6 years old and is seen by the paediatric cardiologist twice a year.  In June 2018, she underwent a cardiac catheterisation to widen the pulmonary valve and this was done via keyhole surgery at Great Ormond Street Hospital.  Not wanting to miss out on school, Eleanor returned to school later that week.  The paediatric team have always encouraged Eleanor to do as much as possible so she enjoys swimming lessons and P.E. clubs as well as cycling and her schoolwork.  She is a bright and active girl who is determined to succeed.” 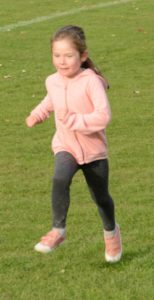 On Sunday 4th November 2018 six-year old Eleanor from Milton Keynes ran with three other children, all with heart conditions, at the Beehive junior parkrun in Welwyn Garden City.

By taking part in the 2km junior parkrun Eleanor is not only showing what children with heart conditions can achieve but will be improving her cardiovascular health which will improve her overall fitness and reducing the risk of her developing cardiovascular disease in later life.