Told by his mother Fran.

The twenty week scan. A chance to see our miraculous second baby, conceived naturally after years of treatment to have our first son. Our excitement soon faded, seeing the colour drain from the sonographer’s face as she told us she couldn’t find the baby’s heart. We then waited with bated breath as numerous silent people with grave faces, came into the room and examined our baby. Eventually, the consultant -who had been brought in for us on his day off -told us that our baby had a very serious heart condition, not likely compatible with life and did we want a termination. We said no, so two days later we found ourselves walking into Great Ormond Street Hospital for a fetal ECHO. After a detailed scan the Consultant Paediatric Cardiologist (Dr Ian Sullivan) kindly explained that our baby’s heart had a very serious condition, involving very tiny underdeveloped right ventricle, two holes and the main arteries the wrong way round with a blockage in one of them. He also explained to us the three stages of palliative surgery which the baby would undergo in infancy and childhood, in order to create a Fontan Circulation. With cautious optimism he suggested this adapted circulation would allow him to live until he was about 19 , when he would most likely need a heart transplant.

Dominic was born in March 1998 and taken by emergency ambulance straight to Great Ormond Street Hospital, where his first major heart operation (Right modified BT shunt) took place at just four days old. Unfortunately Dominic was found to also have other medical problems: idiopathic eosinophilic colitis was diagnosed at three months old and hypermobility later still. He also had a very rare tumour age two and needed surgery for obstructive tonsillitis. All of this meant he spent long periods of time in hospital in London, often very sick and yet still bravely smiling through. We nearly lost him to pneumonia on two occasions and septacaemia on another. As a result of all this all his milestones were late. He was also found to have extremely long sight for which glasses were prescribed. The second stage of major heart surgery, the Bi Directional Glenn, took place as an emergency when Dominic was three, as his BT shunt had blocked and his oxygen saturations had fallen to the fifties at rest. 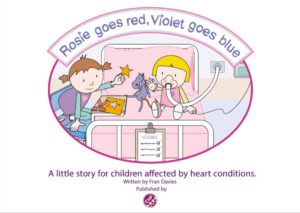 Dominic used to draw himself with blue hands and feet and lips and then after this operation he drew himself with pink ones. This was a revelation that he understood more about his condition than anyone had realised. This observation inspired me to write a little story to help heart warriors and their siblings to have a very simple understanding of the impact of congenital heart disease: Rosie goes Red , Violet goes Blue.

As if he hadn’t already had enough to contend with, the impact of the restricted diet and medications he was on to help manage the severe colitis meant he suffered with brittle bones and endured a number of low impact fractures. Nonetheless Dominic’s catchphrase was always “I’ll manage”. 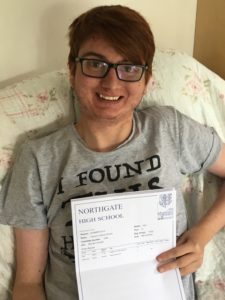 Dominic with his A level results

With an educational needs statement in place Dominic attended mainstream school where despite missing many days due to ill health or appointments, he still managed to bag a prize for determination at the end of primary school. Whilst other boys played football, Dominic decided to take up pottery as even after all his surgery his physical stamina was compromised. Secondary school was more difficult as his needs were not so well understood but he still managed GCSEs before moving on to a very supportive sixth form, where he spent the next four years determinedly aiming to complete enough of his lessons to be able to take his exams.

At the end of November 2017 having developed post-fontan protein losing enteropathy and heart failure in 2015, our lovely son was placed on the list for a heart transplant. He was 19 years old- just as predicted all those years ago during the fetal ECHO!

We are still waiting for his call…but meanwhile Dominic reckons his character traits of being ambitious, determined and proud have taken him far- and would earn him a rightful place in the house of Slytherin if he ever got to Hogwarts!

Dominic had a successful transplant in early 2019.

Dominic made a remarkable recovery and was able to start living well! Thanks to the generosity of the donor family in their time of grief, he has been able to fulfil his dream of attending university to study History & Archaeology. He did the first year remotely from his bedroom at home (due to Covid19) but this academic year he’s lived away from home in student accommodation!

It’s incredible to think how far he has come, developing his independence and making the most of all the opportunities available- including learning to play baseball, something totally unimaginable in his life before! It’s true there are still many daily medicines & regular hospital appointments and moments of uncertainty, but the health & freedom he now has is extraordinary!

To those who are earlier in their journey,  please never give up hope, but in the meantime make every day matter!