Dominic Davies aged 21 tells the story of his heart condition, his heart transplant and why he supports the law change relating to organ donation

Hearing that there’s something very wrong with your baby’s heart must be terrifying. That’s what my mum was told at her routine scan when she was 20 weeks pregnant with me. We were referred to Great Ormond Street Hospital where a fetal echo confirmed that, effectively, I only had half a heart and the bits that I did have were in the wrong place or riddled with holes. It was a mess.

When I was born, I was more poorly than was hoped and, after a quick cuddle with mum, I was whisked away to Great Ormond Street. I had my first operation at four days old, the first in a series of palliative surgeries to reorganise blood flow and give me a better chance of having a decent life.

I was often ill as a child and had much less energy than my brothers or my friends. Instead of playing football with them, I made model planes and did pottery. I became an expert at the subtle stall – stopping to look at something as a pretext for catching my breath. Despite these little tricks and tactics, there was no escaping from the fact that I did need a wheelchair from time to time and would get especially poorly during the winter.

After my palliative surgeries were completed when I was seven, I had a few years of relatively good health although I was still limited and, as a family, we were not able to live what you might call a normal life. Nevertheless, I managed to complete my GCSEs and get into sixth form.

It was then that things took a turn for the worse.

In January 2015 my health started to rapidly deteriorate. I was diagnosed with Protein Losing Enteropathy and I missed the important, exam-filled half of that school year. Luckily, I was able to go back and redo year 12. I managed to scrape through that year and went back for year 13. Again, I missed more school and so yet again I re-did year 13. That year my health deteriorated to a point where I was wheelchair-bound almost all the time and, eventually, I was listed for a heart transplant in November 2017.

Through utter grit and determination, I finally achieved very good A-levels in the summer of 2018 and spent the next few months attempting to make the most of the limited energy I had whilst waiting for the transplant team to call. The wait was incredibly nerve-wracking – so much so that I changed the ringtones on my parents’ mobiles so that I would know when it was a family member calling and wouldn’t get so worried every time the phone rang.

By Christmas, I could hardly breathe, eat or concentrate on anything. When Dom can’t manage to eat Christmas dinner, something is incredibly wrong! What’s more, the medications that had been keeping me stable were no longer working and I could hardly move without needing my wheelchair. In short, I was dying.

Not long after this, I received a letter from the Freeman Hospital in Newcastle, the only place in the country where patients with congenital heart conditions such as mine can have a heart transplant, saying that I needed to be re-assessed for an urgent listing. That meant I would have to wait in the hospital rather than at home, as I had been doing for the past year. This letter scared me. I thought of all the things I would miss if I had to stay in hospital. I would miss my twenty-first birthday and I was thinking I’d be lucky to be out before Christmas. 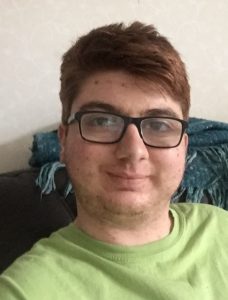 However, I didn’t have much time to dwell on my fears. Two days later, in the middle of the night, my parents got a phone call from the Freeman. They thought they had a heart for me. It was half past one in the morning. My mum woke me up and explained what was happening. I got myself sorted and ready in half an hour (my bag had been ready for over a year!).  After an emotional farewell from the rest of the family (slightly surreal at that time of the night) we set off. Now all that was ahead of me was a six-hour journey, in the middle of the night, with my dad and my thoughts.

Dad keeps saying how remarkably calm and collected I was. In my mind, there were three outcomes:

When we arrived at the hospital, there were still checks that the surgeons had to do to make sure the donor heart was completely suitable and ready. I waited in the hospital for five hours, messaging friends and family, just to keep my mind off things. During the wait, I had all the usual ‘obs’, a chat with the anaesthetist and I met the surgeon. I was then given the go ahead and just had ten more minutes to wait whilst the theatre was being prepared. After a quick chat to Mum on the ‘phone, my emotions finally got the better of me and I had a little cry. Eventually, I was wheeled down to theatre with my dad at my side and I was put to sleep.

It’s been almost seven months since my transplant now. I was discharged from the ward within five weeks, although I immediately started a regime of regular clinic visits which meant I had to stay in hospital accommodation as we lived so far away. Even so, I was allowed home for my twenty-first birthday, something I didn’t even think would be possible even before I got the call.

Without the courage and generosity of the donor family I would not be here now .My life has so much more of an upwards curve now and I am so grateful for the life chances I have been gifted.. For example, I’m beginning to look at going to university next year– something which, before, I was aspiring to but knew I would not be able to manage in my previous state.

The wait for a donor was gruelling and scary. I didn’t know how long I would be waiting or if I would even manage to survive long enough. The new organ donation law is something that could not come too soon. I know from personal experience how scary a long wait can be, but I also know how amazing the result can feel.