Please Donate
News►Does your child have a rare condition? Write to your MP.

Does your child have a rare condition? Write to your MP. 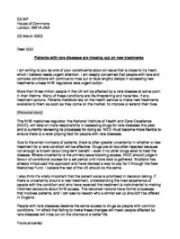 CHF with other organisations is urging NICE (National Institute of Health and Care Excellence) to make fair decision regarding the prescribing of drugs to people with rare conditions, this includes some heart conditions.

If this affects a member of your family we urge you to write to your MP, download a template letter to which you can add your child’s story.

The following questions and answers explain the situation.

Who makes decisions about what drugs can be offered on the NHS? How does it make these decisions?

Decisions about what medicines are made available on the NHS are largely made by the National Institute of Health and Care Excellence, also known as NICE.

NICE’s approach to assessing whether a new medicine should be made available to NHS patients is based on weighing whether the benefits that it brings, based on an evaluation of the clinical evidence, are justified when set against the cost to the NHS.

Why is there greater uncertainty in whether a rare disease drug is effective?

It largely comes down to numbers and how confident NICE is that patients will benefit from a drug. There are several reasons why NICE may be less confident in the potential benefits of a rare disease medicine than a treatment for a common condition.

For common diseases, decisions are usually made after phase III clinical trials, which can involve hundreds or thousands of patients. If these trials show good results, NICE can be more confident the drug will be effective.

Normally in a clinical trial there will be a control group who receive the current standard treatment for the disease and the drug has to perform better than that treatment. For rare diseases, the treatment could be the very first for the disease so there is no direct comparator.

If the new drug works in a completely new way, NICE might have concerns about the lack of data around the long-term effects of the treatment. This is particularly relevant to diseases of childhood – most of which are themselves rare diseases.

Why does uncertainty lead to rare disease treatments being rejected?

NICE has set very high standards for the type and volume of evidence that it will accept to inform its decision-taking. Its preference has been for strictly controlled large-scale clinical trial data, to ensure that the evidence is as clear as possible on the benefits of the treatment in question, independent of any other factors.

However, as more treatments for smaller numbers of patients have been developed, challenges with NICE’s traditional approach have arisen. For many rare disease treatments, it is simply not possible to generate the types of data that NICE has requested. As a result, there are much higher levels of uncertainty about the effects of these new medicines at the point at which NICE evaluates them and the drug is then initially rejected until the manufacturer can provide more evidence.

What else will NICE consider before making a decision?

NICE will consider whether a drug is cost effective – whether the price asked by the manufacturer is justified by the benefit the new treatment provides patients compared to the current standard treatment for the disease already offered by the NHS.

NICE will also invite healthcare professionals, such as the doctors who ran the trial, and patient representatives to give evidence about their experiences regarding the treatment.

How would greater flexibility help?

If NICE were able to conditionally approve drugs – which had some evidence of benefit but not enough to meet the evidence threshold – until more data was gathered and reassess the drug at a later date, there could be big benefits.
• NICE would have more data to show the true benefit of the drug as well as any side effects
• Patients with rare conditions, some of which have no treatments available at all, could access the drug right away without any unnecessary delays

NICE already have some flexibility for some cancer drugs, which can be made available through the Cancer Drugs Fund until more data is gathered. This should be available for rare disease patients as well.

Could the Innovative Medicines Fund help?

The new Innovative Medicines Fund could be a route through which changes could be made that help to address the challenges with access to rare disease treatments, including those related to uncertainty. However, the Government hasn’t yet set out what it plans to do with the fund, or how much of the fund will be allocated to non-cancer medicines.

Why is the situation different in Scotland?

The NHS in Scotland is in charge of its own budget and has its own medicines regulator, the Scottish Medicines Consortium (SMC). The SMC has different processes and methods for taking decisions on which treatments should be made available.

Why is the patient voice so important?

Due to challenges in assessing rare disease medicines, the patient voice is a hugely important resource for decision-takers. Patients are able to help decision-takers fill gaps in the data and understand what the condition in question is like for those living with it on a daily basis. They can also provide a unique perspective of the benefits of the proposed treatment in practice, based on their lived experience of receiving the treatment through a clinical trial.

However, the extent to which patients and patient organisations are involved in the development of NICE’s recommendations on rare disease treatments varies significantly. There is no standard process that gives formal weight to patient evidence or opinion, unlike in Scotland where ‘Patient and Clinician Engagement’ meetings bring experts together to provide advice on factors that may not have been captured by the data analysis, or Wales, where ‘Clinician and Patient Involvement Group’ (CAPIG) meetings fulfil a similar function. There are also examples of formal processes in other countries with similar systems, such as Canada, which could provide lessons on best practice for England.

We believe NICE should take the opportunity of the methods review to evaluate how it could strengthen the patient voice in decision-taking, particularly in the assessment of rare disease treatments

How will the NHS afford all these drugs?

There are a number of ways the NHS might look to fund new rare disease medicines. For example, Scotland has set up a New Medicines Fund to make sure innovative new treatments that really benefit patients can be paid for. The New Medicines Fund is paid for by rebates paid by the pharmaceutical industry under a UK-wide scheme that limits overall spending on branded medicines. The Scottish Government decided to ring-fence their share of the rebates so that innovative new medicines could be paid for.

Drugs that greatly improve quality of life, or even cure, can save the country money in the long run in a number of ways – such as allowing patients to return to work or removing the need for care.