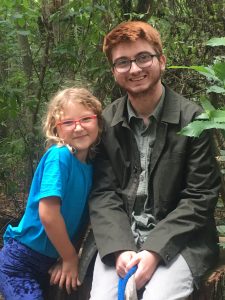 Ava grew up with Dom who was born with a serious heart condition which eventually led to him having a heart transplant. Eight-year old Ava was inspired to write this fantastic story during her school holidays.

Hello my name is Ava and I’m writing this book for children who have heart conditions.

Problem – Cyan has a poorly heart and it keeps getting worse and worse. 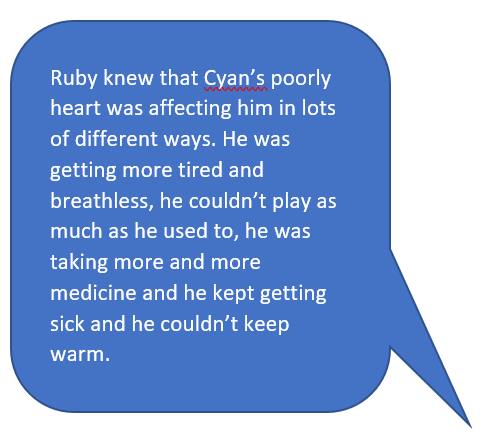 One hot Summer’s day, Ruby was helping her brother Cyan up the stairs. She was in her favourite strappy crop top and shorts, but Cyan was in his fluffy onesie and he still looked blue. Ruby knew that Cyan’s poorly heart was affecting him in lots of different ways. He was getting more tired and breathless, he couldn’t play as much as he used to, he was taking more and more medicine and he kept getting sick and he couldn’t keep warm. Ruby finally helped Cyan up the stairs and tucked him into his bed. She gave him his favourite teddy and his joke book, to keep him entertained. Ruby knew that it was really boring staying in bed all the time, especially as they could hear children all around them playing in their gardens, laughing and having fun in the sun. Ruby stayed in with Cyan to keep him company whilst they read out jokes to each other.  Ruby noticed if Cyan laughed too much he went even more blue. She felt scared because she knew he had hospital appointment the next day, that was the moment of truth when they would hear whether Cyan was too poorly to stay at home any more. Cyan had been born with a very poorly heart and it had got worse and worse, even after lots of  medicines and operations,  so now the only way to help him get better was for him to have a heart transplant. 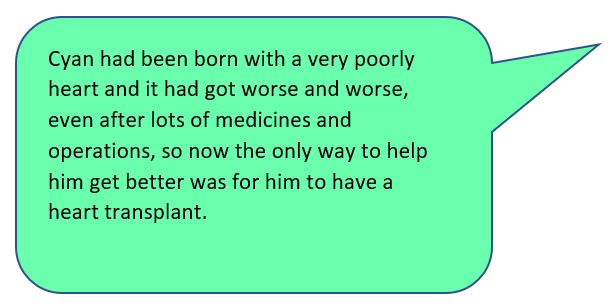 Far away in a busy city, Troy was doing “wheelies” on his new bike. His mum had told him always to make sure he wore his helmet, but as soon as he had got out of sight, he took it off and put it behind the tree at the corner of his road. He wanted to look cool when he met his friends and showed them his birthday bike! Suddenly he saw  Rory and Cory across the street and without thinking he whizzed into the road. The next thing he knew he was flying through the air and then everything went black. He had ridden out in front of a car.  The ambulance came and took him to hospital with his mum, who was crying and asking him to wake up. Troy didn’t respond.

Later that evening, the doctors came to talk to Troy’s mum. They said sadly Troy’s brain could not recover from the accident and he had no chance to live , but if it was ok with her, he could give a chance for others to live by donating his organs. Troy’s mum knew he would have wanted this, so she said yes.

It was the middle of the night at Cyan & Ruby’s house. Everyone was asleep when Ruby heard the phone ring. Bleary eyed she crept downstairs and answered the phone. “Hello” said a kind voice, “ Can I speak to your mum?” Ruby knew this was the transplant coordinator…. Did that mean there was a heart for Cyan? She rushed up the stairs and called “ Mum, mum it’s  the transplant coordinator, there’s a heart for Cyan I think!” Ruby’s mum put on her glasses and took the phone from Ruby. It felt like hours until her mum came off the phone even though it was only five minutes. Then suddenly everything happened really quickly. Mum woke Cyan and told him the news and they all hugged each other. Then they picked up the bags that had been packed for weeks and Ruby and Dad waved goodbye to Mum,  Cyan and his best teddy Mr Squiggles, as they set off in the ambulance. It had its lights on and everything.

When Cyan got to the hospital, Mrs Davies the surgeon came to see him. She was smiling. “It’s a good one we have for you, just a few last checks and we will be good to go”.

Mum squeezed Cyan’s hand. After what seemed like forever, a smiley nurse came with a gown for Cyan and scrubs for Mum. The gown had planets, hearts and dinosaurs all over it.  When everyone was changed it was time to go to the operating theatre…. Five hours later Mrs Davies came out with a sleepy Cyan. Mum couldn’t believe how pink he looked. “Everything went really well and the new heart is working great” said Mrs Davies with a big smile. “The next bit can be a bit bumpy, but I am sure it won’t be long before he’s up and well on the way to recovery”

“Thank you sooooooo much” replied Mum, her eyes full of happy tears as she followed them to the  intensive care unit, where Cyan was settled in surrounded by machines and tubes and wires and a very busy nurse. He was still asleep but that was all part of the plan.

Two days later, Ruby and Dad came to visit Cyan in the hospital. They brought him a balloon and a big world puzzle, some chocolate and bubble-gum and a thick shake from the café. Cyan was sitting up smiling at them in a nice blue chair. They were all shocked, because they hadn’t expected this so soon! 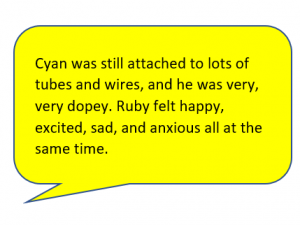 Cyan was still attached to lots of tubes and wires and he was very, very dopey. Ruby felt happy, excited, sad and anxious all at the same time. She wanted to go up to him and give him a nice big squeeze but she knew she couldn’t. His ribs were still very fragile after the operation. Instead, she gave him a big smile and blew him a kiss.

Cyan gave her a weak smile in return and Ruby knew that, sometimes, little things can mean a lot.

Seeing that he was tired, she took the book from his bedside table. Cyan said that it was the book he was reading so Ruby found the bookmark and started reading to him. After a while, Cyan’s eyes started to feel heavy. He closed them and fell asleep. Ruby stopped reading and turned to Dad. He gave her a look which she knew meant that they needed to leave him alone now. They softly said goodbye to Cyan and Mum and quietly walked out …

Over the next few weeks, Mum kept in touch to say how Cyan was doing. Once in a while, they had a video call but when Cyan got tired they had to stop. Even so, Ruby could see that he was getting stronger and stronger and happier and happier.

Finally, the day came when Mum phoned to say that Cyan was ready to come home. Ruby was so excited, she thought she was going to burst. She danced around the hall with Dad. Then, they hung bunting around the house to welcome him back.

A year later, Cyan was living his best life. He was cycling, swimming and playing in his garden and he didn’t have to lie around in his bed all day. He still had to take a lot of medicines but he could do so much more than he could before. Best of all, he looked pink. He decided it was time to give the donor family a thank you letter: this is what he wrote.

A few weeks later Troy’s mum received the letter which had come through the transplant coordinators.

Letter to the donor family from Cyan:

I am so sorry for your loss and so very grateful for the heart you kindly let me have. I feel like I am going to have an excellent life with it.

I was born with half a heart and had lots of operations to help me. I also had to take lots of medicine, but I still couldn’t do lots of things.

Now I am getting stronger all the time and love being back at school. My friends couldn’t believe it when they saw me walking in on my first day back, as I had  used a wheelchair for so long!

It was so kind of you to give me this chance to live and I promise to take great care of my new heart.

After reading the letter, Troy’s mum cried tears of joy and sorrow. She missed her boy, but it was a great comfort to know that his gift had given another boy a chance to live. She thought she might reply one day and she hoped Cyan always wore his  bike helmet.