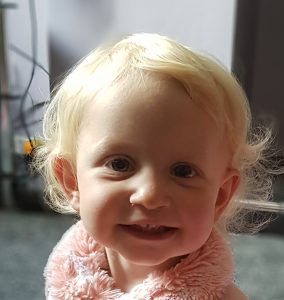 Ava was born on the 10th December 2015. We weren’t aware of Ava’s heart condition until she was rushed to hospital at just under one month old, she was very grey/blue in colour and breathless, she also had poor weight gain resulting from poor feeding and vomiting. We had taken her to the GP several times as we knew something wasn’t right, but every time we were told it was viral.

Ava was diagnosed with pulmonary atresia, pulmonary stenosis, an overriding aorta, a large VSD and three MAPCAs. She ended up on the high dependency unit at the Freeman hospital in Newcastle, and by the 8th January 2016, was transferred to PICU. The same day she went for a catheter procedure to place two stents into two of her MAPCAs. We were told that considering her condition; it was a miracle that Ava was still alive. The only reason she had lasted four weeks at home was due to the duct staying open. At eight weeks old she had to have the two stents renewed because they had slipped.

On the 1 November 2016 Ava underwent her first open heart surgery, which was a partial repair of her pulmonary atresia. They placed an artificial bilateral trunk to connect her lungs and placed a BT shunt from her aorta. Everything went well, although she was rushed back to theatre at midnight due to severe internal bleeding but came back fighting. The surgeon told us that whilst she was open they had found a problem with her left lung, it wasn’t getting any blood flow, and hadn’t been for some time.

In January 2017, they placed another stent in her third MAPCA to the bottom of her left lung in the hope of keeping her lung alive until they can try and save it again at her next open-heart surgery.

Ava’s next surgery is planned for some time in 2018.This will hopefully connect the bilateral trunk to her heart to give normal flow. So far Ava has had 4 catheter procedures, one open heart, an endoscopy and a gastrostomy. She was fed via an NG tube for 14 months because of not feeding and severe reflux, in this time she was on eleven different formulas due to tolerance issues. She then had an NJ* tube placed, but that only lasted five weeks after being rushed to hospital vomiting a large amount of blood. We had previously visited A & E several times and had told her consultant something was not right, but we were ignored. In April 2017, Ava had a gastrostomy, which didn’t help with her vomiting of formula. In July 2017, I made the decision after reaching out to a gastroenterologist in the USA, to put Ava on a blended diet. Ava has since thrived and is even eating small amounts orally and drinking orally too. We are still a long way off from her being tube free, however it was the best decision I could have made for her.

Ava has defied all odds and keeps on fighting we have been lucky so far to have not spent that long periods in hospital. Ava still has her ups and downs, and her oxygen levels sit between 75 & 85%, however sometimes she can drop to the low 60s, which is very scary.

We don’t know what the future holds for Ava, but we take each day as it comes and make it count. She is a bright, happy, intelligent little girl who loves socialising.

I think it is important to let people know how serious CHD is, but also that children can grow and live a happy life!

These information sheets may also be helpful.