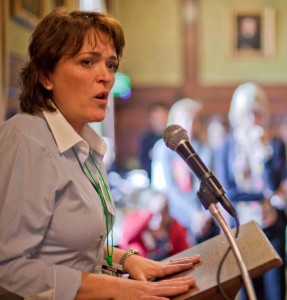 Julie has been a trustee for Children’s Heart Federation since 2002 and chair since 2003. Over the years as chair of CHF, Julie has represented CHF at many meetings, forums and events, speaking in support of families of heart children and fundraising drives. She has seen many high points and not so high points, but CHF has continued to be a successful charity and the most significant contributor to the paediatric cardiac world within the UK due to the tenacity and commitment of the CEO, staff and fellow trustees.

Julie is the founder and chair of trustees of Max Appeal, the national charity for families affected by 22q11.2 deletion. This is the most common of the rare disorders and approximately 75% of those affected have congenital heart defects. Max Appeal is the largest parent-led organisation for this condition globally. Julie led the production of the “National Consensus Document for the Diagnosis and Management of 22q11.2 deletion”, which is a significant piece of work for 22q families. She personally supports families as she mans the Max Appeal telephone helpline, takes email enquiries and administers the Max Appeal Facebook and Twitter profiles. Julie is involved with the International 22q Foundation and European President’s VCFS Network. In 2010 Max Appeal hosted the first international meeting for 22q in the UK with 65 expert speakers from five continents and back to back scientific and family programmes.

Julie would like children with congenital heart disease to be treated appropriately to their specific needs, and as they age being able to access the network of services available to people with coronary/acquired conditions, including rehabilitation and physiotherapy programmes, hence her involvement as a trustee since 2009 with CCP- UK, (Cardiovascular Care Partnership) which is the patient ‘arm’ of the British Cardiovascular Society.

In her BC life (before charities) Julie obtained a degree in housing (management and construction) and membership of the Chartered Institute of Housing, then the Royal Institution of Chartered Surveyors when working as a general practice surveyor in Worcester. After the birth of her first child she worked for an environmental consultancy with a broad range of projects from desk studies of contaminated land for redevelopment and national environmental projects such as the CardiffBay project to reintroduce bitterns to Wales.

Julie has been married to Paul for 20 wonderful years and has two delightful children, Georgia aged 19 and Archie aged 13. Her first son, Max, died of septicaemia in 1999 at the age of four months. This was due to complications arising from 22q11.2 deletion, those being complex congenital heart defects and a poor immune system. Following his death she established Max Appeal and so became embroiled full-time in the world of 22q11.2 deletion and congenital heart disease.