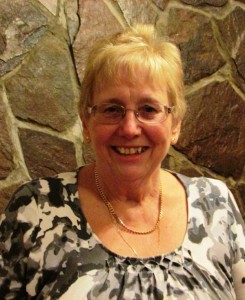 Chris is a trustee of  CHF and also the chair of the Downs Heart Group. She has been a trustee for a number of years. She is a a Health Visitor working in Cardiff and has three children: Louise, Helen and Richard. Richard has Down’s syndrome with complex health needs that include cardiac issues. He was born in 1985 and spent most of his first 2 years in hospital.

Chris became involved with the DHG initially in order to provide as much support and information as possible for other families. Working in the health service made her realise that professionals are sometimes not very good at giving the information that our families need and often no sign-posting.

She first became involved with CHF as a helpline volunteer and was then asked to be a trustee.

She now works two days a week having retired three years ago, but decided that she was not yet ready to retire properly (she enjoys her work but also enjoy her holidays)!   Richard is a great young man who also enjoys his holidays although if he had his way it would be Disney every time, and there‘s only so much Disney theme park she can cope with! Luckily he loves swimming and sunbathing so regular trips to the sun are part of his lifestyle.

She considers herself very lucky to have the support of her long-suffering husband who regularly gets her to the station for an 8am train to London for trustee meetings and then will be there to pick me up again in the evening!

Chris says “it has been a pleasure being a trustee for CHF, all the staff and other trustees are very supportive of each other”.