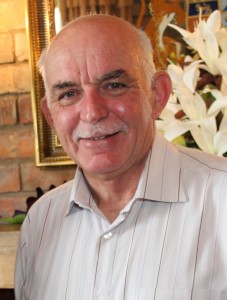 Irwyn joined Heartbeat 25 years ago when his daughter was diagnosed as having an aneurism after having Kawasaki Syndrome and she had by-pass surgery two years later. He has been chair since 2000 and three years ago rebranded the charity to Heartbeat NI. He joined Children’s Heart Federation as a trustee in 2002/2003.

He was very pleased to be asked a long time ago to be a trustee. He believes that it is important that there are strong links between Northern Ireland and the rest of the UK and that we too should have a voice, especially with important matters such as the Safe and Sustainable process. He has learned a lot from his trustee colleagues and hopes that they in turn have learned a thing or two from him and also have benefited from his input at trustee meetings.

Any spare time he has is devoted to his wonderful family – he has five beautiful grand-daughters who all live close by and he gets no bigger pleasure than to spend time with them. He does play a little golf, usually badly, and also helps out at his local junior football team, of which he is a committee member.