Dean is a trustee for the Children’s Heart Federation and works for British Airways Aircraft movements.  He works primarily in carrying out final safety checks of departing aircraft, assisting the flight crew in safely starting aircraft engines and safely departing the aircraft on time.  Dean works in pus 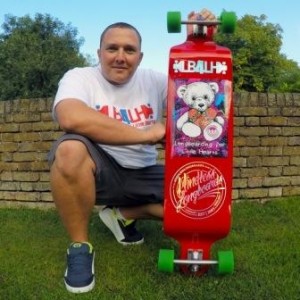 hback and towing of aircraft around Heathrow and communicating with air traffic control.

Dean became involved with CHF when his daughter was born with Tetralogy of Fallot.  After she had open heart surgery Dean felt compelled to start fundraising to give something back to the heart community, and he chose CHF as it was the leading children’s heart charity in the UK, representing 21 local and condition-specific children’s heart charities.

Dean got into longboarding as he used to do a lot of surfing on the British coast and he needed something to keep him occupied when he was landlocked!  Looking in a surf shop in Bournemouth he stumbled across a longboard skateboard, and the rest is history!  To mark the first year since his daughter’s operation, Dean organised a sponsored skate to raise money for CHF.  The support and interest in the first longboarding event was overwhelming, leading to the creation of Longboarding for Little Hearts (LB4LH).  LB4LH is directly linked to the CHF, raises awareness of CHD and acquired heart disease in the young, raises funds for CHF and involves the skaters and the skate world in the fight for children with heart conditions.

More recently Dean has created the Heart Dad’s Support Group, which is currently active on facebook.  This group is exclusively for fathers, grandfathers and male guardians of children with heart conditions, enabling the men in heart kids’ lives to speak openly and in confidence.
Dean is really looking forward to his new role within CHF as a trustee to help look out for the charity’s best interests and ongoing success.